In April, Jemma Taylor attended the “European Legumes in Transition” webinar series, focusing on the outcomes of the EU Horizon 2020 funded LegValue and TRUE projects as well as the launch of the Legume Innovation Network. 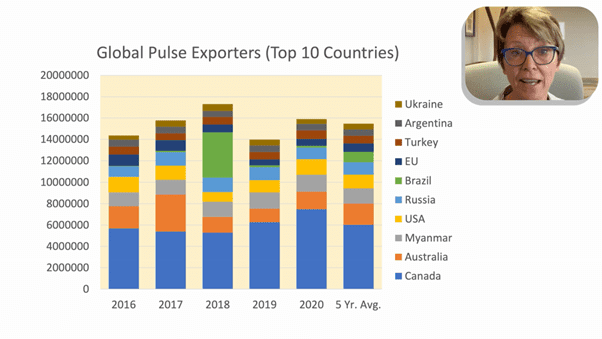 The series covered breeding, production, value chains, end use and policy of legumes grown across Europe. They showed the diversity of legumes and highlighted key needs and barriers hindering progress.

Currently legumes, which cover about 5% of agricultural land in the EU, are classed as minor crops. More must be done to increase the importance of legumes in European agriculture.

Nicolas Guilpart (INRA) and Daniele Antichi (Universita Di Pisa) highlighted the lack of data about growing legumes. Such data, coupled with climate metrics, could be used to create models to help farmers identify the best legume crops to grow on their land in a given season. Their preliminary modelling showed increased data collection could also highlight blind spots for legume growing across Europe, which could help mitigate the effects of climate change on pulse production.

The LegValue project sought to understand the market for legumes, analysing market transparency, how they are organised and the creation of added value in value chains. Some of the results showed the importance of price in the grain legume market, but highlighted the volatility of trade which makes growing legumes a risky venture.

Cindy Brown (Global Pulse Confederation) took a global view showing the main importers and exporters of legumes (see image above), and examining how this trade had been affected by both the Covid-19 crisis and the growing demand for plant-based diets. She is expecting a bright future for legumes with increasing demand for pulses and the investment in infrastructure to keep up with this.

Marie-benoit Magrini’s (INRAE) presentation on legume supply chains looked at the need for long-term investment and better organisational arrangements. One finding revealed the critical role of knowledge exchange and investment in value chains, and how valuable face to face interactions are in mediating this.

One of the TRUE project outcomes presented was about Life Cycle Assessments for legume-based products. Two functional units – serving size and nutrient content – were analysed for three meatball products: Irish beef, Brazilian beef and a plant (legume) based ‘meat’ ball. A range of environmental factors were considered and the plant-based option consistently came out on top. Similar analyses compared wheat-based and chickpea-based pasta, with the chickpea version generally performing better, mostly due to reduced nitrogen use. These assessments are further evidence supporting increased legume production.

Several presentations focused on reducing soya imports (mostly as high-protein livestock feed) into the EU. Denmark aims to stop using non-European soya for feed by 2025, while in the Netherlands trials are looking to improve soya bean yield and efficiency through Rhizobium inoculation and nitrogen application. The work undertaken within the two EU Horizon 2020 projects have shown that other legumes such as faba bean, pea and lupins can be grown in Europe and have good protein profiles, so can be used for feed.

A Swiss consortium is showing that soya bean can be grown organically for human consumption and has adapted existing infrastructure to process it. With the organic and EU grown label, they have created a market pull, and can quality check the beans, so the best goes into the food chain, and rest used for animal feed, so none is wasted.

In Europe there was an 82% increase in land used for soya bean growth between 2011 and 2020. Donau Soja is supporting the uptake of soya bean production through building a membership of 280 companies across 25 countries and endorsed by 24 EU governments. It is therefore hoped that ambitious targets set by Europe and individual countries, such as Denmark, for increased soya production and reduced imports can be met.

Legume breeding was another area of interest, with projects on faba bean, soya bean, alfalfa and pea being showcased. All showed potential but require consistent investment to generate meaningful results. In particular, Fred Stoddard (University of Helsinki) covered the LegumeGap project which is investigating the gap between potential and actual legume yields and the effect of climate change.

The conclusion of the LegValue and TRUE projects has catalysed the beginning of many other projects such as INCREASE and DiVicia. The creation of the Legume Innovation Network means work can continue to be collaborative across the sector and across Europe, to meet the demand for plant-based foods, alternative proteins and food security.

If you are interested in working with CHAP in this area through their novel protein and crop diversification pillar/core value, please email us using the enquiries form at the bottom of our homepage.