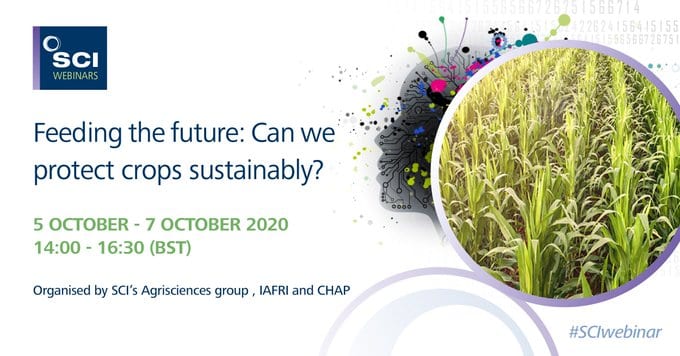 In the first session, consultant Richard Maycock highlighted the shrinking availability of plant protection products available to growers, and how this may accelerate the development of pesticide resistance. He said alternatives such as biopesticides and biostimulants were unlikely to be ‘silver bullets’, and should be considered alongside PPPs as part of an integrated pest management (IPM) program. For me, the most interesting aspect of his talk, was the risk posed by invasive species, for example Fall Army Worm which first appeared in West Africa in 2016, but is now threatening crops in 30 African countries. He showed how the future of crop protection requires joined up thinking to monitor and assess the risk to crops, using different approaches, tools and technology to tackle the problem.

For the second session CHAP’s Richard Glass chaired discussions about the role of technology and precision agriculture in future crop protection. Newcastle University’s Professor Neil Boonham described his vision for digital agronomists using technology as part of their decision support toolbox. He showcased developments such as lateral flow devices (akin to a pregnancy test) for quick in-field detection of resistance in black grass, and the use of next generation sequencing platforms to examine multiple problems in whole populations. His discussion of the barriers to adoption of these technologies was particularly interesting, showing how diversity and complexity was both a strength, in providing options to the industry, and a limitation especially if an agronomists require several apps for each individual system. The latter could be solved by a level of integration and standardisation.

Keith Norman, formerly Technical Director for Velcourt, then examined the role of precision agriculture in sustainability. Beginning with the astounding fact that only 3% of land globally is available for agriculture. He said precision agriculture could identify where yields could be increased, allowing less productive land to be placed into environmental stewardship schemes. He showcased the use of aerial mapping to influence seed rates used across a field, establishing a more uniform and productive crop, and introduced novel sensors under development, including radiometrics to decipher soil fertility, and ground penetrating radar for yield prediction in potatoes.

The final session covered genetics and plant breeding. Dr Alison Bennet from NIAB explained how domestication of wheat had created genetic bottlenecks. She said wild relatives contained a wealth of potentially useful genetic traits, such as disease resistance. NIAB has crossed wild relatives with durum wheat, creating a genetic bridge and leading to increased trait discovery. She also discussed potential tools for improved crop breeding including genetic modification to selectively target genes, a useful method for wheat which has a large genome (17bn base pairs, compared to 3bn in humans).

Dr Brande Wulff of the John Innes Centre, rounded off Day One with a look at his work developing methods of cloning resistance genes from wild relatives to better identify future breeding targets. Perhaps the most interesting part of his talk was the impact technology has made on the speed at which these traits can be identified, with the number of potential traits being discovered doubling within a year or two thanks to new sequencing and bioinformatics processes. This has now brought about the possibility to ‘stack’ resistance genes giving more durable long term resistance to disease.