The theme of this year’s Oxford Farming conference was Business as Unusual, a nod to the difficult and extraordinary times we are living through. Agricultural innovation, in many forms, has been key to making sure the UK farming sector has been able to cope with multiple COVID-19 pandemic lockdowns on top of the uncertainty of post-Brexit trading rules. 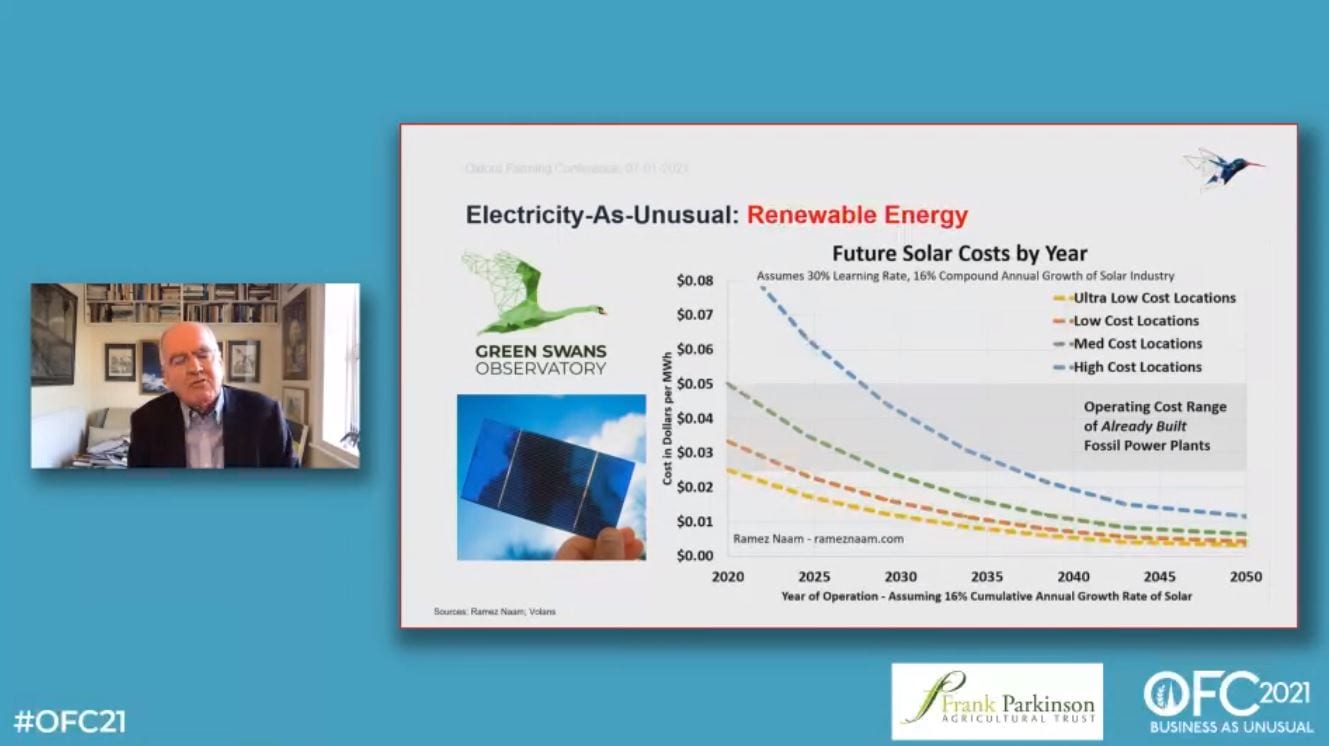 OFC Chair Sally Williams’ opening address was followed by the Politics session, with contributions from the agricultural leaders of the four UK nations.

George Eustice, Secretary of State for Environment, Food and Rural Affairs, England focused on the importance of agriculture and the role played by the sector’s key workers, especially during the past year, in maintaining our food security. He namechecked four of CHAP’s partners – NIAB, James Hutton Institute, Rothamsted Research and Cranfield University – in his rollcall of world-leading Agricultural Research Institutes. He also looked to the future, announcing a new consultation looking to change English law to allow sys-genesis gene editing. Making the distinction from the controversial trans-genesis GM, he said gene editing was a ‘natural evolution of conventional approaches to plant breeding’ that creates opportunities to breed plants with natural disease resistance, that would be able to perform better with fewer inputs and better adapt to the changing climate.

Fergus Ewing, Cabinet Secretary for Rural Economy, Scotland discussed the loss of EU funding and focused on tree planting and the renewal of peatlands.

Lesley Griffiths, Minister for Environment, Energy and Rural Affairs, Wales spoke of the importance of the sector in the country, saying agriculture was critical to the preservation of the Welsh environment, culture and language. She said Wales planned to replace direct payments with a Sustainable Farming scheme that rewarded farmers for the outcomes they were already delivering alongside sustainable food production, such as improving soils, stopping pollution and reversing habitat loss.

Edwin Poots, Minister for Agriculture, Environment and Rural Affairs, Ireland spoke about the need for new technologies in the sector. He addressed the difficulties of remaining bound by EU rules, unlike the rest of the UK. He put sustainability and increasing efficiency at the heart of his speech, saying agriculture has a key role to play in Northern Ireland’s sustainable economic and social growth, and recognising the need to invest time and money in better economic and environmental outcomes. He said innovation and technological advances must be part of the solution, and that regulation must keep pace with innovation.

The next session, Trade, Trade, Trade, discussed the leadership required to manage the constant disruption that is impacting trade. Tim Smith Chairman, Trade and Agriculture Commission, outlined the vision to keep UK farming competitive while maintaining standards and reflecting consumer interests. He said the agricultural backbone of the UK should be maintained and pointed to farmers’ crucial role as custodians of the countryside. He said the road ahead would be bumpy, but that we were entering a new and exciting era of agricultural trade.

Rob Ward from the DIT, focused on the need for collaboration across the sector. He called for a celebration of excellence, rethinking trade standards and digitising every step from farm to fork. He celebrated agri-tech innovation and highlighted the level of innovation across the UK, which saw 2,800 project grants worth £3.3bn, from InnovateUK in 2019-20. He celebrated the UK’s leadership in technology sector, attracting more funding than the rest of Europe combined, and called for cross-sector collaboration to make the UK a world powerhouse for trade.

James Bailey, from Waitrose drew parallels between premium retail and the agricultural sector. Selling a premium product requires confidence in the quality of the products, so integrity is vital. He also highlighted the need for innovation and transparency, which he saw as potential competitive advantages. He called for farmers and retailers to collaborate, innovate and work together to meet consumers’ needs.

Ash Amirahmadi from ARLA spoke of the agricultural sector being at a tipping point as consumer habits had changed in response the COVID-19 crisis, with eating and cooking at home becoming increasingly important. He said the crisis had made the industry realise the role it plays in feeding the nation. The sector’s ability to adapt to the changing circumstances was a real strength and, in the future, the sector needs to build on this. He spoke of changing regulation but highlighted growing opportunities with a doubling of online sales. He said an increasingly data-led approach would democratise decision-making in the food supply chain.

Sustainability guru and author John Elkington, an expert on corporate responsibility and sustainable development, presented this year’s Frank Parkinson Lecture, Farming as Unusual. He explained how the coming boom in Regenerative Capitalism was changing corporate mindsets, with big implications for how we produce, distribute and eat food in the UK. He highlighted Vertical Farming as a good example of sustainable food production, with falling energy prices and increasing renewable energy sources reducing production costs and local production taking out much of the distribution cost. He also pointed to the development of precision fermentation techniques which could replicate meat and milk protein production.

This year’s Science Lecture, ‘People, Planet, Prosperity – Getting our Food Systems Right’ was delivered by Professor Tim Benton. His focus was on the mismatch between the types of food produced and what we need to consume for good health and a sustainable environment. The focus on cheaper food has led to less diversity, poor diets, degraded environments and increasing food waste. The solution, he proposed, was a shift to change the focus from price to nutritional value, increasing diversity and sustainability, and introducing regenerative farming practices. While technology is key to the future of farming, systemic change is not driven by technological developments in conjunction with legislative changes, rather it needs to incorporate changes across multiple social, economic and governance areas. We need to recognise that technology has negative as well as positive effects.

To learn more about how technology is revolutionising agriculture, read our Focus on Data Diagnostics article, The Rise of the Digital Farm, by Keith Norman.