Intercropping for Sustainability Conference looks to the future 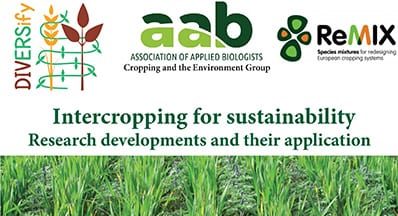 The Association of Applied Biologists (AAB) conference was organised by the Horizon-2020 funded projects DIVERSify and REMIX. It featured the major findings from these and other projects within the Crop Diversification Cluster (CDC).

The conference was aimed at scientists, farmers, advisers, industry and policy makers to showcase recent research, instigate debate around the practical uptake of intercropping and share the key challenges and innovative solutions for future focus.

The online event featured a varied selection of informative short presentations and posters showcasing the research that has emerged from the CDC projects, interspersed with plenary talks from invited speakers covering some of the wider perspectives of intercropping within agriculture.

After a brief welcome by Dr Alison Karley (James Hutton Institute), on day one, Dr Antoine Messéan (National Research Institute for Agriculture, Food and Environment, INRAE), coordinator of DiverIMPACTS, began by defining intercropping as a temporal or spatial increase in crop diversity. He then introduced the role of the CDC projects in exploring the barriers and potential solutions to intercropping uptake across agri-food value chains, from farms to consumers.

The day was then split into parallel sessions centring around intercropping for yield benefits, environmental benefits and ecosystem services. Another theme was the positive impacts of intercropping on nutrient acquisition and pest management, including weed suppression, reduced cabbage stem flea beetle infestation of oilseed rape, generalist pest predator boosts, and complementarity in nitrogen acquisition for legume and cereal mixes under low fertilisation.

Feedback gathered from industry stakeholders for DIVERSify was also presented, detailing the currently available and attainable solutions to intercropping barriers, including precision-agriculture technology, such as the CHAP field-scale precision strip-till cultivator.

The day closed with a discussion between Eveline Adam (Saatzucht Gleisdorf Ges.mbH), Prof. Martin Weih (Swedish University of Agricultural Sciences), Andy Howard (Bockhanger farms Ltd) and Dr Robin Walker (Scotland’s Rural College), chaired by Caroline Drummond (Linking Environment And Farming). Areas for research progression dominated the discussion, including the necessity of sharing local knowledge by strengthening communication between farmers, researchers and policy makers, and overcoming challenges in market and consumer bias towards monocropping. There was also an emphasis on the importance of thorough research and planning when designing intercropping systems.

Dr Charlotte Bickler (Organic Research Centre) opened the final day, which featured parallel sessions on new approaches to investigating intercropping mechanisms and management of intercropping systems through species, varieties and sowing arrangements. Talks covered development of an interactive web application for crop mixture design, impacts of semi-arid climates on interspecific relationships and a comparison between intercropping in China and Europe. Some of the issues surrounding research trials were also considered during discussions, including methodology inconsistencies, short-term perspectives and a lack of integration with site cropping histories. Sessions were broken up by plenary talks: Prof. Bernhard Schmid (University of Zurich) explored the possibility of achieving agricultural productivity and conservation through artificially increasing diversity, while Prof. Maria Finckh (University of Kassel) investigated the processes behind agroecological crop health management through organic farming practices.

The conference concluded with a premiere of the final film in a 4-part web series developed for DIVERSify. This showcased overarching intercropping recommendations, covering reducing inputs, supporting agrobiodiversity, knowledge sharing, diversifying cropping sequences and leverage opportunities. The closing remarks given bythe three hosts outlined the main gaps to be addressed. Although the conference demonstrated the benefits of intercropping on agroecosystem resilience and productivity, these gaps must be addressed before intercropping can be integrated into the toolbox of sustainable farming practices.

If you are interested in working with CHAP please send us an email using the enquiries form at the bottom of our homepage.