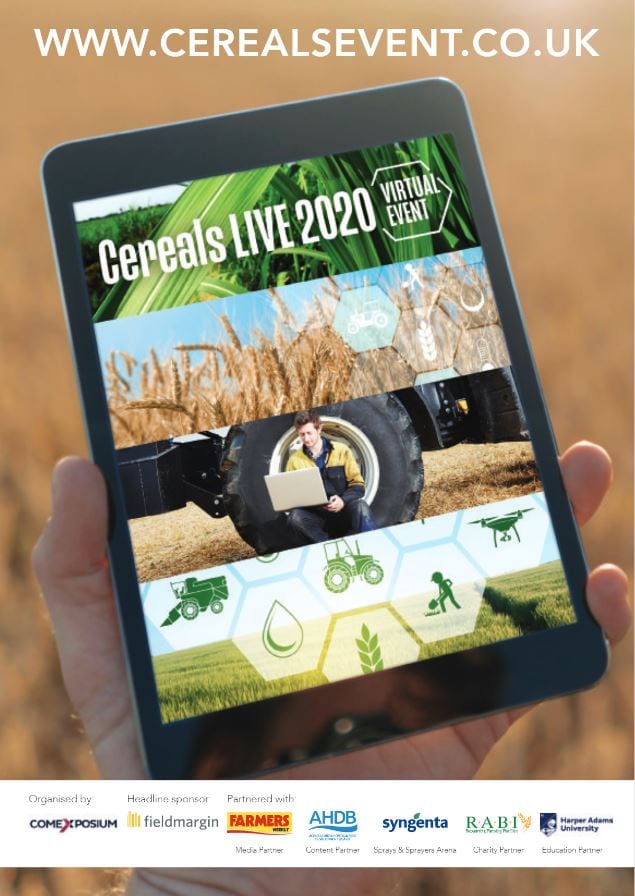 This year’s online Cereals event was arguably even more far-reaching than its physical predecessors, attracting more than 9,000 live viewers, with 15% of attendees joining from outside the UK. CHAP’s Innovation Network Lead, Dr Harry Langford, summarises the event and outlines some of the important take-home messages from an innovation perspective.

The atmosphere and focus around this year’s Cereals event can be neatly summed up by a quote from Jeremy Moody, of the Central Association of Agricultural Valuers: “A lot of the tools for post-Brexit agriculture already exist, but we will need people to embrace a system of continuous change.”

To build on this quote, there is a fundamental triple challenge for farmers in the UK and globally – how to feed a growing population while protecting the environment and generating the income necessary for resilient or improved farmer livelihoods. There are no ‘silver bullets’ in solving this challenge but there are a number of innovators, and innovative solutions that could, through a process of continuous improvement, deliver a productive and sustainable future for UK farming.

With presentations from four farmers, this session really focused on the practical application of techniques and technologies for improving soil health. There was a focus on ‘not wasting sunlight,’ with Julian Gold (Hendred Estate) seeing himself as a “photosynthesis facilitator”, Sam Walker (Stantyway Farm) stating “never let the soil see the sun”, and Clive Bailye likening crop production to baking a cake – “if you want to bake a bigger cake, you need more of your key ingredients (soil, air and water)”.

It was refreshing to see the often-neglected ‘soil structure and root zone function’ make an appearance in Julian’s presentation, as he overviewed the concept of increasing plant diversity (through cover crops), focusing on a diversity of root structures with differing microbial fingerprints to optimise carbon sequestration and organic matter building, assisting the plants and soil organisms by minimising traffic and soil disturbance. Julian also highlighted that controlled traffic farming needn’t break the bank, and that simple innovations such as wheel-way conditioners can help ensure that compaction is minimised at the field scale.

Having less money tied up in machinery capital was a common theme, with Clive Bailye emphasising that this gave him more funds to innovate with. Resilience was another key reason for embracing regenerative agriculture, with Clive commenting that he “tended to drought out a couple of weeks later than his neighbours”. Despite all the benefits, some challenges were acknowledged by the speakers, including terminating high biomass cover crops without glyphosate and the risk and complexity associated with buying in sewage sludge or anaerobic digestate for soil amendment.

This session was innovation-focused, with excellent overviews of breeding technologies, from marker-assisted breeding for resistance traits through to CRISPR-Cas9 gene editing technology.

Cristobal Uauy (John Innes Centre) described the gene editing technique, utilising the Cas9 protein as ‘molecular scissors’ to cut the plant’s DNA in a targeted location (using a guide RNA sequence). This cut induces the plant to repair the cell, which introduces a mutation that typically disables a gene. This plant can then be studied to see if this edit introduces an advantageous trait, e.g. improved drought tolerance. Breeding through gene editing is more controlled, and thus faster to reach a positive end-goal, than breeding through more conventional chemically induced or radiation-induced mutations, though it is currently not permitted in the UK in germplasm.

Rob Giles (Syngenta) focused on the hybridization of wheat, which is the crossing of two pure lines from very different genetic pools to create a hybrid variety, typically offering improved rooting, plant growth and resilience and increased tillering (i.e. hybrid vigour), all leading to an improved yield and quality. Syngenta, along with other multinationals in the sector, have been breeding for a new and improved generation of hybrid wheats, typically using a genetically controlled sterility system to improve seed production. This has improved the hybrid wheat seed quality and production rate, allowing for faster breeding and a wider focus, to include sustainability traits such as improved nitrogen use efficiency and increased root biomass.

Hybrid wheats designed for the UK market, and for sustainable intensification, are now very close to commercial reality; it will be interesting to see how they can fit into current and future farming models and deliver on the UK’s environmental challenges.

This session overviewed the use-cases for digital technologies within agriculture, from image analysis and in-field monitoring to predictive tools and agricultural machinery/robotics.

Luke Halsey (Farm491) focused on interoperability and the role that it plays in future-proofing your farm, asking the question about “how new on-farm technologies can give farmers more influence in the supply chain”.

The new ASSIST Environmental Planner, developed by the Centre for Ecology and Hydrology (CEH), was also launched. This useful new tool classifies national environmental datasets based upon their suitability for different environmental land management options (i.e. public good services under the anticipated Environmental Land Management Scheme from DEFRA). This allows the user to interrogate their farm/land/locality and get a heat map that indicates the estimated suitability of particular interventions.

Jack Wrangham (DroneAg) brought the session back round to primary production, outlining the role that automated drone surveys and intelligent AI software can play in monitoring plant health, weed prevalence and stress/disease hotspots, approximately five times faster than on foot. The main barrier to digital technology uptake on farms is certainly that “there are so many systems that don’t talk to each other”, so it was excellent to see that interoperability had been considered by Jack, via an application interface (API).

CHAP CEO Fraser Black presented an update on our state-of-the-art sophisticated decision support platform, CropMonitor Pro developed by Fera and funded by Innovate UK, while CHAP partners AHDB also had a good presence at the event, with Paul Neve giving an excellent overview of next-generation crop protection and IPM in the arable rotation. Although speaking across different sessions, these speakers all focused on a ‘next generation of sustainable productivity’, from the role of understanding and improving soil and plant health to the role of lightweight automated machinery within new, and more integrated, farming system models; certainly a system worth embracing.