Groundswell from the scientists’ perspective 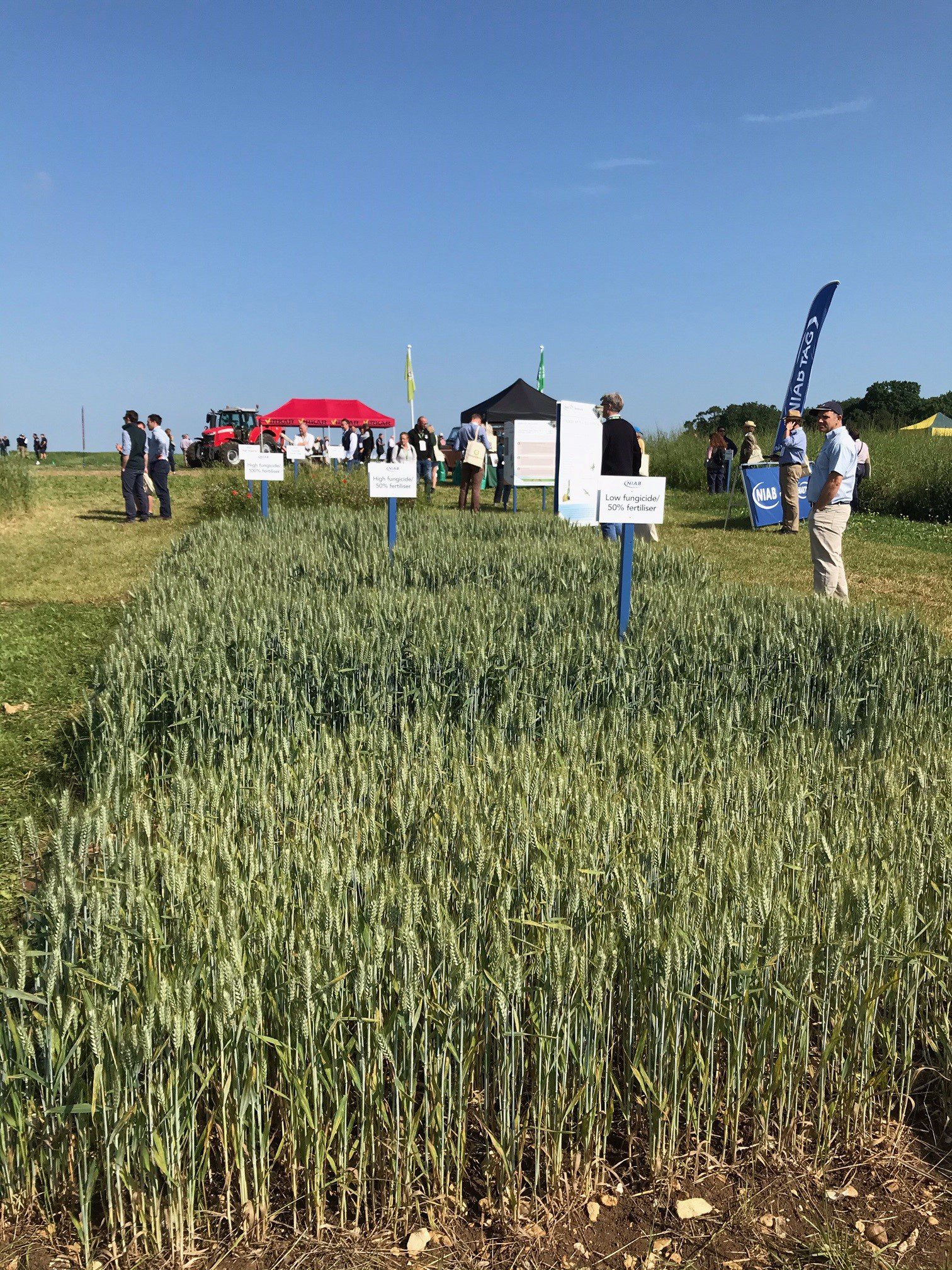 CHAP’s remit is to make connections between science and growers, to ensure that agri-tech innovation is tailored to the needs of those on the front line. With this in mind, several members of the CHAP team attended Groundswell last month with a view to learning more about which issues were most important for UK farmers. Here Innovation Lead Dr Harry Langford and Technical Liaison Officer Dr. Laura Cumplido-Marin detail the sessions that stood out for them.

The Groundswell Regenerative Agriculture Conference and Show witnessed the biggest and broadest attendance yet. It was a melting pot of information and ideas, with everyone exchanging knowledge and ideas and championing the benefits of regenerative agriculture. This was particularly evident among farmers, which, given that this is a bottom-up, farmer-led event, is not surprising. The full marquees and well-attended demonstration events covered a range of subjects from compost turning to drone scouting. These are our personal highlights

The Understanding Regen Ag talk from Ben Taylor-Davies provided an excellent overview and farmer perspective on designing and implementing a regenerative farming system that works for the farmer, food production and the environment. It was great to hear that some of the learnings on herbal leys demonstrated by academics as part of the Soil Security Programme were being implemented on-farm, with Ben choosing to integrate a three-year diverse herbal ley into every field rotation, during which time they also repair drainage and improve hedgerows. It was also really interesting to hear Ben setting himself quantitative targets for soil health, with “4 million worms per hectare by 2045” a particular example. Focusing on some of the more innovative changes that Ben has made to combat soil erosion and improve soil health – in his light and erodible soils growing high-value crops such as asparagus – it was excellent to hear that a combination of more conventional (increasing field margin width by 2m) and novel (intercropping asparagus with clover and row mowing) techniques are paying off for Ben.

In Making Delivery of Public Goods Attractive, Janet Hughes from Defra outlined plans for the phased delivery of the three Environmental Land Management Schemes (ELMS). First, the Sustainable Farming Incentive will cover universal actions that anyone can take, second the Local Nature Recovery Scheme will aim to pay for the right things in the right place and last but not least, the Landscape Recovery Scheme will cover land-use change or habitat restoration. The schemes will all be fully available by 2024.

In synergy with the development of ELMS, Defra will also offer grants and support innovation programmes to help farmers deliver and optimise their new management plans. Janet also reassured farmers during questions that Defra is looking into “growing with the nascent alternative markets, e.g. carbon or biodiversity net-gain, and working in synergy, stacking up and offering farmers options, but not paying for the same thing twice”.

Professor Karl Ritz from the University of Nottingham overviewed the relationships between soil structure and function in soils in his ‘What Lies Beneath’ session. In  common with many of the Groundswell presenters, Karl outlined his views on system diversity carrying more potential and thus being more resilient, enabling farmers to better ‘cope’ with extremes of environmental pressures. He also spoke about soil biology as the ‘engine’ of the soil, transferring energy to deliver ecosystem services and overcoming critical productivity bottlenecks such as the conversion of organic nitrogen through to nitrate. An interesting statistic was that up to 33% of microbial-bound nitrogen can be released by predators, but if there is no living root there at the time, this can easily leach away.

In their practical session, Emma Gilmartin and Louise Hackett from the Woodlands Trust explained the differences and common features of veteran and ancient trees and how to identify them, providing in situ examples just outside the conference grounds. They highlighted the role of veteran and ancient trees as biodiversity hubs within the agricultural landscape and demonstrated how to calculate their root protection. They also provided some management recommendations, such as allowing enough space for trees to develop, planning and enabling tree succession, retaining dead wood on site, as well as creating additional animal shelters.

Stephen Briggs, Harriet Bell, Ben Raskin, and Prof. Steven Newman gave a clear and practical insight to the adoption of agroforestry systems and their benefits, environmental, ecological and economical. They presented various approaches on how to select a tree species, from multipurpose trees to market demand and economic return. They discussed the importance of good quality tree stocks, age of trees, supply of trees, and outlined different ownership and tenancy scenarios. They also offered advice on planting and management to increase tree survival, as well as harvesting, market and product uses. Potential changes in future prices and the associated risk, which is managed through modelling tools and analysis of those models, was of particular interest to the audience.

Arable to Animals with Stephen Briggs, George Hosier, Jo Franklin, Liz Genever and David Miller covered the introduction of sheep and cattle into arable farms. Although each followed different strategies, they painted a good picture of their experience implementing regenerative agriculture practices and livestock into farms. After initial fails, the speakers were proud to communicate their success, and happy to give recommendations and advice to anyone interested.

They emphasized the key role of competent shepherds and the difference that investment in fencing and ancillary infrastructure can make. The question of a future of an agriculture without glyphosate was also raised, concluding that it could be doable in combination with other practices such as the use of selective herbicides, reduced till, interrow hoeing or living mulches. The audience showed great interest in soil health, particularly ways of monitoring and measuring soil microbiology, soil erosion, insects and earthworms, and organic matter.

Farming to reach net zero and sub-zero with Martin Lines, Helen Chesshire, Craig Livingstone and Andrew Barbour covered the speakers’ personal experiences of introducing practices to create more resilient systems, sequester carbon, enhance wildlife, and increase animal health with the main aim of adapting their businesses to be carbon negative. Martin Lines, chair of the Nature Friendly Farming Network raised a key question: “What is the objective of farming?” While many would say the answer was increasing food production, he said the objective was “to increase quality and biodiversity, and to reduce our environmental and carbon footprint by focusing on our natural assets”. Martin also spoke about reducing the use insecticides, pesticides, and mineral fertilizers, as well as increasing soil health by widening rotations. They all recommended carrying out carbon audits but there was no consensus towards selling carbon credits because of the lack of policies and direction from the government.

You couldn’t help but notice the myriad of carbon trading platforms or services being presented at Groundswell, or the polarized farmer debate that was being generated in this area. Certainly some farmers, particularly those with larger farms with more diverse existing operations including woodland, have already sold their carbon to other sectors in a range of multi-year agreements using a variety of platforms, but other farmers were a lot more tentative, stating that “without a transparent set of rules and frameworks in the UK, I worry that in 10 years I won’t be able to provide that carbon sequestration”, or that “you shouldn’t sell something that you might need to use yourself to balance your own books”.

One thing that is certain is that this debate will rage on, but we must be mindful of two things going forward: first, ensuring that land pressures for delivering Net Zero do not out-compete food production or endanger self-sufficiency, and second, ensuring that farmers and land managers treat the carbon-capture pool associated with ‘efficiency improvements’ with the caution it deserves.

For scientists it can be hard to see how the outputs of research are translated into the real world but attending Groundswell 2021 was incredibly useful, reassuring and refreshing. Seeing how farmers are so open and interested in adapting their business to incorporate more sustainable practices and the host of other stakeholders (including CHAP) working towards delivering a healthier agriculture and environment was a real breath of fresh air.

Read about CHAP’s visit to Groundswell and Cereals here.

If you are interested in working with us in the area of regenerative agriculture, please send us an email using the enquiries form at the bottom of our homepage.