From academia to agriculture: How science underpinned the Green Revolution 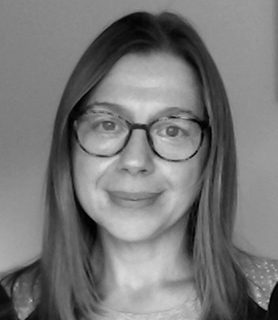 CHAP’s Innovation Director, Dr Ruth Bastow, discussed how scientific research and innovation underpinned modern agriculture, as part of the recent Agriculture 101 event hosted by Agri-TechE. During this day-long event attendees were provided with key insights into the agriculture sector, which included current innovation opportunities, industry challenges, technological insights and more. Here, in the first of a two-part series, we delve deeper into her presentation to examine how the science of the past has shaped current agricultural production, and what the opportunities are for future innovation.

Dr Bastow began by putting the spotlight on how farming has directly benefited from scientific research and innovation over the past few centuries.

“Science is not a series of ‘big-bang’ or ‘light-bulb’ moments, but the accrual of many smaller advances in knowledge, technology or innovation.” says Dr Bastow.

In Europe, this was first led by developments in mechanisation from about 1750 onwards, driven by rural laborers leaving the land to work in new factories and industrial cities. But that was just the start. Next, there was a need to increase crop yields to support a growing industrial population. Here in the UK, the introduction of synthetic fertilisers such as superphosphate, followed by phosphorous, nitrogen and potassium led to the intensification of agriculture, especially cereals. 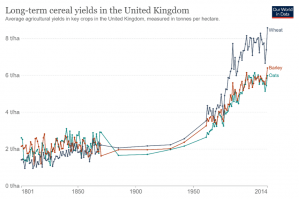 Source: Broadberry et al, (2015) and Food and Agriculture Organisation of the United Nations (OurWorldInData.org/crop-yields CC BY)

However, this didn’t solve the problem and the need for more food intensified throughout the 20th century. Around the 1950s, agrochemicals and genetic manipulation were introduced – enabling the agriculture sector to accelerate further than before. This period was called the ‘Green Revolution’ – a time of great prosperity and promise in crop production.

From the 1960s onwards this led to considerable change, with more food being produced per hectare than ever before worldwide. 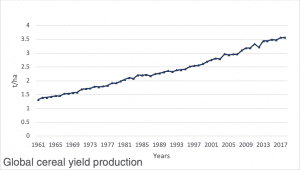 Today this trend continues, with an ever-growing need for more food per hectare.

However, we now also know of the negative impact of the ‘Green Revolution’ in contributing to biodiversity loss, higher fresh-water usage, intensified application of pesticides, increase in greenhouse gas emissions, and so on. Consequently, we have a paradox of needing to produce more food from less land, which will also require less resources (e.g water, fertilisers and pesticides) to produce.

Here Dr Bastow asked, ‘What will farming look like in five, 10, or 15 years?’ ‘Will the rise in technological and biological advancements be enough to bridge this gap?’. To some extent we already have a sneak-peek of the future with new technologies such as robotics and artificial intelligence (AI). But the question of how long it will take to implement the latest technologies is a more difficult, and one often posed to CHAP.

To read the concluding article on this topic, go to The Innovation Process.