A greener side to glyphosate? 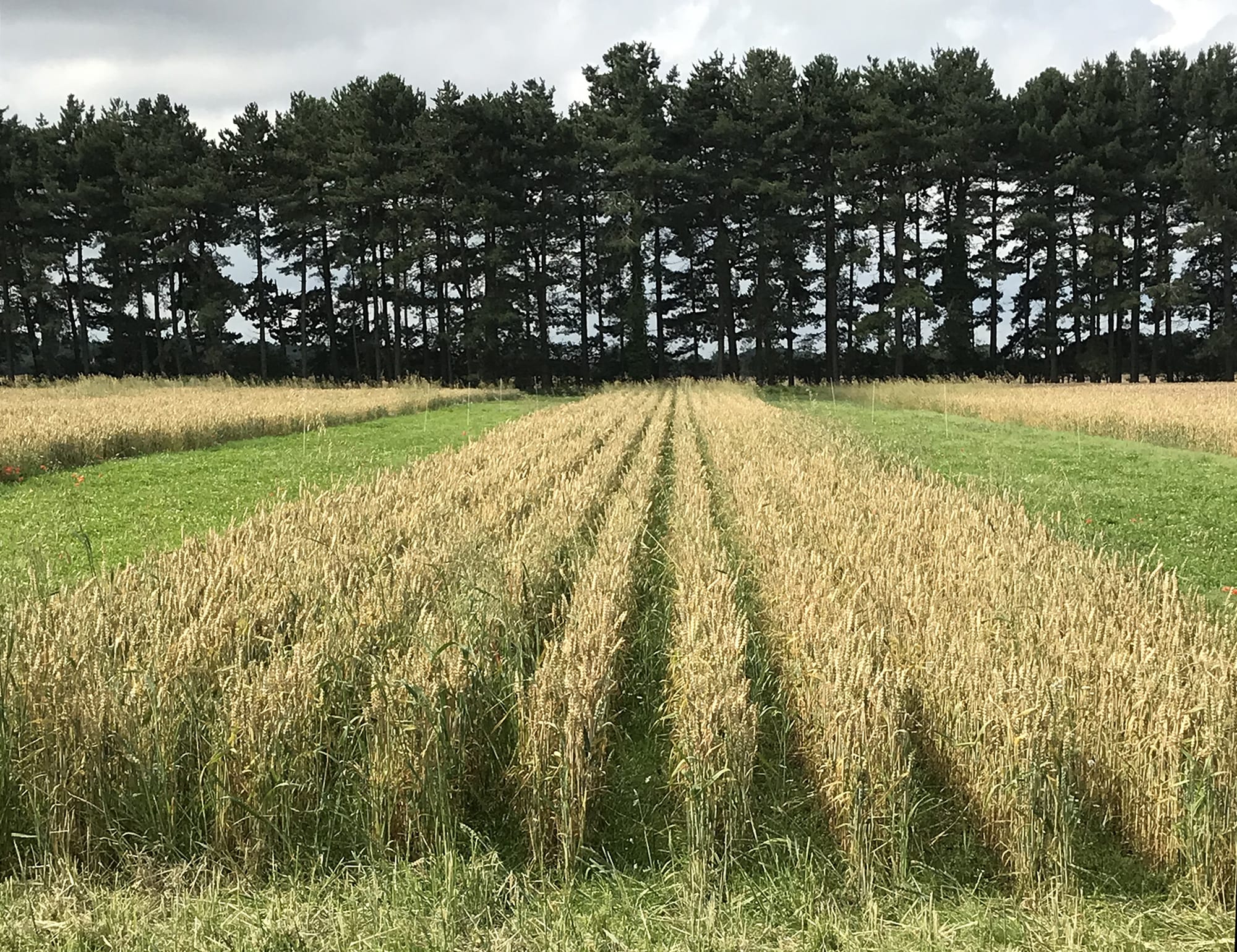 Dr David George is a Reader in Precision Agronomy at Newcastle University. Before making the move to Newcastle he worked at Stockbridge Technology Centre, where he was involved in several projects using CHAP capabilities, including research into min- and no-till . Here he examines the case for retaining glyphosate in sustainable agriculture

First synthesized in 1950 and originally patented as a chelator in the Sixties, glyphosate has been with us for longer than 85% of the UK population. It was brought to market as a broad-spectrum pre-emergence herbicide in 1974 by Monsanto under the familiar trade name of Roundup™, with Roundup Ready™ seed developed through the 1990s, expanding its post-emergence use in areas where GM crops are grown. Glyphosate now dominates the worldwide herbicide market, with close to 10 billion kg having been applied across the globe (Benbrook 2016).

Based on its non-target toxicity profile, glyphosate can be considered as being relatively safe, with a LD50 value (mean lethal acute dose in rats) of 5,600 mg/kg. For the most part, however, exposure to glyphosate ‘in vivo’ would be prolonged, not acute, though here too glyphosate stacks up favourably based on independent review (EFSA, 2015. Conclusion on the peer review of the pesticide risk assessment of the active substance glyphosate).

Nevertheless, in recent decades our approach to evaluating agrochemical safety has drastically changed. In the EU, Regulation 1107/2009 enforced that a hazard-based approach superseded the previous risk-based system when placing ‘plant protection products’ on the market (see Regulation 1107/2009), resulting in many pesticides being withdrawn from sale. Increasing scrutiny was simultaneously directed to those that remained, bolstered by increasing mainstream public and policy interest in food safety and the environmental impact of farming, which has continued to gather momentum.

In the UK this has been at least partly driven by Defra’s National Ecosystems Assessment (2011), with subsequent high-profile publications and policy aligning to Global Grand Challenges and the Sustainable Development Goals (adopted by all UN Member States in 2015). This has cemented a socio-political-driven shift to ‘sustainable intensification’ of food production, embedded within the 25 Year Environment Plan launched by government in 2018 and positioned at the core of future, post-CAP sector support systems (e.g. ELMs).

As a result of the above, our demands on farming, and our expectations of farming practice, have both changed dramatically since glyphosate was ‘born’. Pressure for intensified production that dominated the Seventies and Eighties was replaced through the Nineties and Noughties by support systems to encourage environmental enrichment and restoration. Current demands have moved beyond general conservation objectives to emphasise natural capital, and especially carbon, as we ever-more urgently look for ways to correct anthropogenically driven climate change, environmental pollution and biodiversity loss.

The potential juxtaposition of ‘farming for environment’ is easily overlooked, and as a result we risk unwittingly regulating away possible solutions that could contribute to helping us attain this ambitious oxymoron. Glyphosate, for example is being banned from most agricultural uses in countries such as France; a reaction to WHO’s International Agency for Research on Cancer (IARC) designating it as a ‘probable carcinogen’ (this conclusion being notably based on hazard, as opposed to risk, assessment). Without access to glyphosate, weed management, crop desiccation and productivity of farms could obviously suffer, but what about their ability to support natural capital gains and transitions to more sustainable farming practices? Could a synthetic herbicide, more than old enough to qualify for a state pension, play a contributory role here? Is there a greener side to glyphosate?

With ELMs on the horizon there’s never been more on-farm interest in sustainable agriculture. In response to the Government’s push to use ‘public money for public good’ UK farming is rising to the challenge of finding new or reinvented ways to nurture natural capital whilst still feeding the 9 billion, all while aiming for ‘net zero’ by 2040. Flowering field margins, a mainstay of past environmental stewardship agreements, are being reimagined to co-deliver production and conservation cheek-by-jowl and catch crops, cover crops and minimum tillage are being increasingly used to preserve and improve soils, soil processes and below and above-ground biodiversity. There is even rising interest in a return to polycultural production, with plant-team cropping offering a myriad of agronomic and environmental benefits and being promoted through a number of large EU projects.

While organic agriculture has historically served as the test bed for such ‘regenerative’ techniques, current uptake is sector agnostic. The pressures to reduce inputs and deliver for the environment are now universal across farming systems, and potential gains from current baselines would, on balance, be more significant in scope and scale at the conventional end of the spectrum.

Incorporating such techniques into conventional farming is not without challenge. Flowering margins can be troublesome to establish and maintain, requiring careful attention to weed management to ensure that diverse swards of often poorly competitive forbs can establish, thrive and deliver for biodiversity targets. Catch and cover crops can turn from hero to villain without timely termination ahead of the drill, negatively impacting establishment of the following cash crop. Zero tillage removes soil cultivation and physical burial as weed management tools. Plant teams require management of multiple crops simultaneously, with the increasingly variable subtleties of weather risking mis-matched maturation rates and complications at combining, even for whole crop harvests.

The case for glyphosate

In my 20 or so years in field-based crop research I’ve faced all the above challenges, and in all cases the solution was the same: glyphosate. This is not to say that there aren’t alternatives, many of which I’ve explored, always with enthusiasm and sometimes with success. Nevertheless, none were what could be described as ‘mainstream’ and, when weighed against glyphosate, all fell short in some way; be it in terms of technology readiness, required time/capital investment for implementation, or in their expected efficacy to get the job done to a sufficiently acceptable standard within a conventional agricultural context (e.g. where consumer and supply chain demands dictate high crop homogeneity and harvestable yield).

Even where such solutions were successful, their delivery was assisted by glyphosate. During my time at Stockbridge Technology Centre, for example, I worked on several projects to develop clover living mulches for use within cereal rotations, overcoming potential plant team harvest issues by utilising a low-growing leguminous living understory that we drilled into year-on-year with CHAP’s strip till cultivator and Manterra Ltd’s precision agriculture expertise. While this approach ably addressed any combining concerns, glyphosate still played a key role in checking the clover ahead of the drill, thereby promoting competition-free crop establishment.

Thus, in my own view, glyphosate – easily applied through machinery present on every farm and with a long history of effective use – has a key role to play in allowing conventional farming to better transition to more generally sustainable systems. It can support promising and popular keystone practices such as catch/cover cropping, minimum tillage and plant teams, that farmers and scientists alike agree can co-deliver for natural capital and crop production.

Talking to farmers this view seems to be shared by many conventional operations. While ‘the few’ are beginning to explore sustainable (conventional) agriculture in a post-glyphosate world, admirably trail-blazing a path that all will need to follow if glyphosate bans reach pandemic proportions, ‘the many’ would be discouraged from adopting these production practices in the absence of glyphosate. In the short-term at least, this would arguably slow overall progression to more sustainable farming models at a time when we need it to urgently accelerate.

Is there a greener side to glyphosate? At least for now, I think so.

Dr David George is a Reader in Precision Agronomy at Newcastle University. His interests include realising transitions to more sustainable crop production systems through improved integration of ‘farming and environment’. As an applied crop scientist his research is often ‘near market’ and industry driven, with current projects exploring how precision agriculture technology and modern machinery can be used to help co-deliver both production and natural capital gains from farming systems.

Please note, the opinions expressed in this article are the author’s own and do not necessarily reflect the views or opinions of CHAP. If you have any questions about working with CHAP, please send us an email using the enquiries form at the bottom of our homepage.